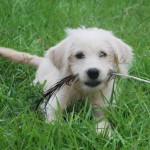 Labradoodle training is an important part of your dog’s growth and development. Your dog should learn all of the basic commands including: Sit, Down, Heel, and Come. He/she should also receive proper obedience training, which is most effectively taught in an obedience class, and should also be properly disciplined and socialized.

All of the above Labradoodle training criteria is how your dog grows to be a credit to his/her breed, a well-liked member of society, and teaches him/her that you’re in control. Training will also make for a happier dog, as dogs thrive on guidance and direction.

Of course, there are more than just the standard commands that you can teach your dog. There are other commands that may also prove to be quite useful such as the release command.

The release command involves using a command that prompts your dog to release the item he/she holds in his/her mouth to you. The command that is typically used for this form of Labradoodle training can be “Give!” or “Let Go!”

The purpose of teaching the release command is to train aggression out of your dog, while still showing that you are in control. For instance, many owners make the mistake of either snatching an item out of their dog’s mouth or allowing there dog possession of an item after playing tug-of-war with them. Both of these instances can lead to aggression and an over-dominant dog.

If you take an item out of your Labradoodle’s mouth by force, you are teaching the dog to fight with you. On the other hand, although it’s not a bad idea to allow your dog to win on occasion, if you continuously allow your dog possession of a toy after fighting over it (I.E. game of tug-of-war), the type of Labradoodle training you are encouraging is telling your dog that he/she has control over you, because you always give in.

The following is how you can implement the release command –

2. When your dog is holding an item you want him to let go of, give the command and position your hand over your dog’s muzzle and place your fingers on the sides of your dog’s lips. Proceed to squeeze his/her lips against the teeth, which should cause him/her to release the object.

3. Continue this 4 -5 times or until your dog releases the object on command.

If your dog attempts to bite or nip at your hand when you perform the above Labradoodle training technique, you can try another method such as giving the command and offering your dog a treat for the toy, or offering a more favorable toy in exchange for the possessed item.